Various powered cycles have surfaced on the market due to increasing demand. Following, there are several technical regulations and legislation applying to the construction of e-bikes within the European Union. With this framework given, the customer enjoys reliable safety measures and standardized models. This article clears up the numerous e-bike rules.

Pedelec and speed-pedelec differ in speed

The pedelec and the speed-pedelec using pedal assistance are particularly relevant to our torque sensor. Essentially what sets them apart is their speed as well as their continuous rated power output. The classical pedelec’s motor output is progressively reduced with increased speed and finally cuts off before reaching 25 km/h (15.5 mph) or earlier if the cyclist stops pedaling, while the speed-pedelec can provide electric assist up to 45 km/h (28 mph).

A throttle that can enable maximum speed without physical effort is not permitted, whereas a start-up assist throttle up to 6km/h can be installed. The other difference applies to the motor output, which for the classical pedelec is limited at 250 Watts.

The ‘factor four’ rule makes up the limiting factor for speed pedelecs. The continuous rated power must not exceed 4 times the human power. As most humans can only deliver about 200-300W continuous power this in effect reduces the max motor power to around 1000W for a speed-pedelec.

The two types of electric bicycles are under differing regulations. The table below gives an overview.

E-bike rules overview: What regulations apply to which bicycles? 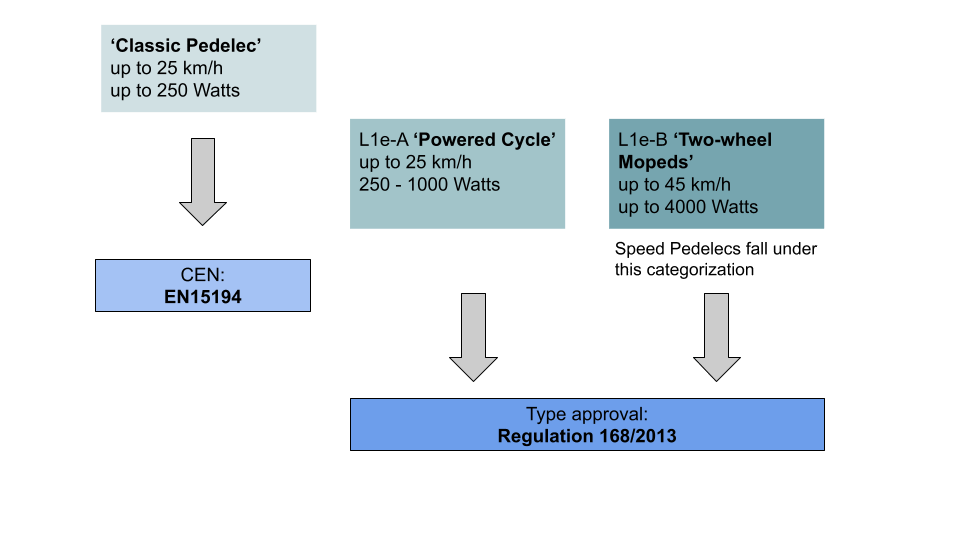 The classic pedelec is the only powered cycle excluded from the type approval (Regulation 168/2013) that came into force in January 2017 issued by the European Union. The CEN (European Committee for Standardization) delivered the standard EN 15194 which is not legally binding for most member states. Yet, they are still subject to several Directives (General Product Safety-, Machinery-, EMC-, Low Voltage Directive). Self-certification by the manufacturers to state the compliance of their products is permitted. By exceeding the 25 km/h mark, speed-pedelecs are classified under L1e-B meaning they are equal to mopeds under the law and must adhere to the rules of the type approval.

Requirements concerning the power management and the motor assisting maximum speed of the classic pedelec are detailed in the EN15194. These include the considerable regulations in the context of our torque sensor. For instance, when the cyclist stops pedaling the cut-off distance of the motor assistance is not to surpass 5 m when using a brake lever cut-off switch and 2 m without. Furthermore, there is an allowance of a 5% deviation of the maximum speed. When it comes to production conformity checks, the permitted speed is up to 10% over 25 km/h.

At 25 km/h the bike travels at 6.9 m/s. The requirement to stop the motor two meters from stopping to pedal is equivalent to a maximum response time of the system of 288 ms (roughly 0.3 seconds).

This can be converted to the crank angle depending on the cadence. Example values are illustrated below:

The designer of the e-bike has to decide the lowest cadence that is considered “stopped pedaling”. This can be 5 RPM or 15 RPM – the EN15194 standard does not specify this (but it really should).

Most cadence sensors are specified in “steps per revolution”. Often designed using magnets that pass some sort of hall sensor. The more magnets, the more steps the sensor will have per revolution. From the table, it can be seen that 17 degrees require 42 steps per revolution of the cadence sensor. This is actually calculated so that the sensor will see two steps for the 17 degrees because most sensors can be sensitive to vibration if the crank is just at the tipping point between two steps. In a robust e-bike design, the bike controller will want to see two steps in the same direction to detect pedaling (or no pedaling).

Following the discussion about how to make an e-bike with the optimum ride feeling, it is clear that this would require a faster response time. Designing for 80 ms would provide the following table:

As can be seen from this table the lower latency required for optimal ride feeling increases the requirements for the cadence sensor significantly.

At the time of writing, the best cadence sensors being specified for e-bikes have 128 steps per revolution. In the future, we should expect to see down to 1-2 degrees of resolution.